I have recently been in touch with some academics associated with the Academy of Inner Science, founded by Thomas Hübl. These conversations have raised the question, just what is inner science? I don’t yet know what Thomas means by this term, but maybe we could look first at the scientific questions that the domain of inner science needs to answer. For sound scientific inquiry begins with asking the right questions.

For me, the most fundamental of these questions is “What is causing scientists and technologists, aided and abetted by computer technology, to drive the pace of scientific discovery and technological development at unprecedented exponential rates of acceleration?”

In my experience, this question can only be answered with Total Awareness, awakening to Total Revolution, as Vimala Thakar inspires us to do in Spirituality and Social Action: A Holistic Approach, being free of attachment to the status quo at these rapidly changing times. By Awareness, I don’t just mean Consciousness, in the way that some modern mystics, like Rupert Spira, use the term.

Rather, for me Awareness is Self-reflective Divine Intelligence and Cosmic Consciousness working harmoniously together to view the Universe, as the Totality of Existence, holographically. Consciousness provides the coherent Light for Intelligence—as the eyesight of Consciousness—to function with full conceptual clarity. The more coherent and brilliant the Light—unclouded by past experiences and future expectations—the more the fragmented mind can be healed, understanding why we behave as we do.

To see how this view of inner science relates to conventional scientific perspectives, let us look at a couple of diagrams from Wikipedia. First, here is a diagram of the constituents of cognitive science, founded to explore the relationships between human intelligence and so-called artificial intelligence and between the mind and the brain. The psychologist George A. Miller proposed these constituents in 1978 under the auspices of the Alfred P. Sloan Foundation.

Now while much progress has been made since Carl Gustav Jung said in 1935 in London that the science of the unconscious psyche had not yet left the cradle, much research is still needed in cognitive science before we have a reasonable understanding of the psychodynamics of society, the most complex structure in the world, far more complex than the brain.

For instance, Uta Frith, emeritus professor at the Institute of Cognitive Neuroscience, University College London, pointed out in 2015 that the Royal Society is very far from accepting inner science as a valid science, as the science of the mind and psyche is still leading “a rather shadowy existence in the hallowed halls of science”. Even though the discipline is over a hundred years old, it is far from maturity, with fewer than three per cent of fellows of this august body being specialists in psychology, or cognitive or behavioural neuroscience, as she denoted this domain.

As she said, “One reason for the currently poor reputation of psychology is the obstinate belief that we already know what goes on in our mind, and that we can explain why we do what we do. This naïve belief will be overcome by improved communication of empirical findings, and especially of those that go against ingrained folk psychology. It’s not rocket science. It’s a lot harder than that.”

One reason for the difficulty in establishing psychology as the primary science, as the inner science on which the outer sciences can be built, is that the two most fundamental sciences of the mind are hidden in this definition of the scope of cognitive science: mathematical logic, as the science of reason, and depth psychology, as the science of consciousness, including the collective unconscious. 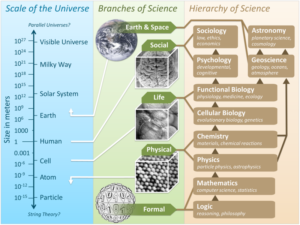 Here is a diagram from Wikipedia in 2013 showing how the branches of science conventionally relate to each other. Although the current diagram has removed the hierarchical dependency of the life and social sciences on the laws and methodology of physics, both the original and revised diagrams show how far apart the two basic sciences of the mind are viewed today. This split has arisen most particularly from an exchange of letters between Bertrand Russell and Gottlob Frege in 1903. They agreed that mathematical logic has nothing to do with psychology.

The other fundamental misconception of this diagram is the cultural belief that the physical universe of mass, space, and time is the Universe. When we look deeply inside ourselves—as mystics through the ages have done—we discover a quite different Universe, one that recognizes Consciousness as fundamental, transcending space and time.

So how can we heal this fragmented way of looking at inner science? On the one hand, mathematical logic, founded by George Boole in 1854 with his Laws of Thought, traditionally provides the underpinning for all the sciences, as the diagram illustrates. On the other hand, mystical psychology, founded a few thousand years ago in the Indian subcontinent, provides the underpinning for our most profound human experiences.

Clearly, we need to find a way of bringing them together if we are to resolve the great global crisis facing humanity today. That is the purpose of the Universal Method, outlined in my previous blog post, providing the Contextual Foundation and coordinating framework for completing the final revolution in science, integrating all inner and outer sciences in Wholeness.

It is important to note that the Theory of Everything that arises from such a synthesis is a form of insight, a way of looking at the world, from Greek theoria ‘a view’, as David Bohm pointed out in Wholeness and the Implicate Order. As Albert Einstein wrote in a famous letter to Jacques Hadamard in 1945, words and mathematical signs, as expressions of scientific theories, only arise as a secondary activity.

Now while this visionary healing process can happen in an individuated being engaged in self-inquiry in solitude, it can best happen in the collective in a safe space through relationships with others, as Thomas said at the Celebrate Life Festival in 2017, when the theme was ‘Collective Trauma – Mysticism – Integration’. The theme of the Festival in 2018 at the Omega Institute in New York is “to explore restoration and healing in these times of fragmentation”.

This is a clear sign of a prophecy that the scientific mystic Pierre Teilhard de Chardin made in The Human Phenomenon coming to fruition. As he said, one day all the divergent paths of evolution will converge at its Omega Point, enabling us to realize this vision: “The way out for the world, the gates of the future, the entry into the superhuman, will not open ahead to some privileged few, or to a single people, elect among all peoples. They will yield only to the thrust of all together in the direction where all can rejoin and complete one another in a spiritual renewal of the Earth.”

2 thoughts on “What is inner science?”