In Wholeness, the past and future do not exist. In Reality, there is only the Eternal Now, where the Immortal Alpha and Omega Points of evolution and involution reside. As humans living in Peace in this exquisite space, there is thus nothing to hope for or despair about. For life and death, as growth and decay, are just two sides of the same coin.

Such a profound understanding arises from consciously living in harmony with the fundamental law of the Universe, which Heraclitus of Ephesus called the Hidden Harmony: opposites, even contradictory ones, are never separate from each other.

Taoists and alchemists also recognize the validity of this irrefutable, universal truth, which Carl Gustav Jung took as the heart of his healing process of individuation—as an undivided being, living in Wholeness. 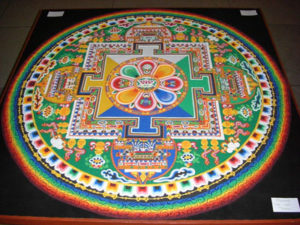 Traditionally, our innate sense of Wholeness is depicted in mandalas, Sanskrit for ‘circle’, such as this one constructed with particles of sand by monks who follow the Dalai Lama on his travels. Such symbols also recognize the impermanence of all structures in the relativistic world of form. For, as soon as these beautiful mandalas are finished, they are returned to dust.

Sadly however, Aristotle rejected the wisdom of Heraclitus, favouring his divisive law of contradiction, which has sent Western civilization into a chaotic evolutionary cul-de-sac. This is both a psychological and mathematical issue, because axiomatic, linear proof systems are based on the denial of what we can also call the paradoxical Principle of Unity or Cosmic Equation.

So, to what extent we humans can be liberated from thousands of years of deluded cultural conditioning before our inevitable demise is the great unknown at present. Of course, anthropocentrically or egoically wishing humanity to awaken from its slumbers in the brilliant, eschatological Age of Light only leads to suffering.

Nevertheless, maybe there is still a possibility at this late hour that some, at least, could be free of wishful thinking, recognizing that Love is the Divine Essence that we all share in the Eternal Now. For, as John of Patmos said in the Book of Revelation, “I am Alpha and Omega, the beginning and the end, the first and the last.”

Revelation is a translation of Greek apokalupsis, from apokaluptein ‘to uncover’ or ‘to reveal’, from the prefix apo– ‘from, away’ and kaluptra ‘veil’. So apocalypse literally means ‘draw the veil away from’, indicating the disclosure of something hidden from the mass of humanity: the Hidden Harmony.

An apocalyptic awakening is thus nothing to fear. For, when Life removes the veils obstructing our innate Self-reflective Intelligence—as the eyesight of the coherent light of Consciousness—the mystery of Life and Being is no longer a mystery and the entire Cosmos is revealed in its glorious magnificence.