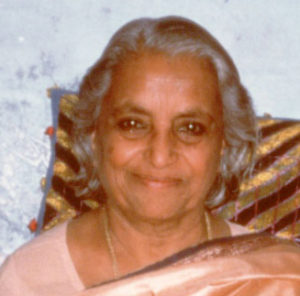 While I have had many spiritual teachers over the years, the one who I feel closest to is Vimala Thakar (1921 – 2009), the most liberated being I have ever met through my reading, for, sadly, I never met her. She described the way she awakened to Wholeness in her thirties in her monograph On an Eternal Voyage, greatly helped by dialogues with J. Krishnamurti between January 1956 and December 1961, when she was forty. As she said at the time,

The development of human personality consists in liberating it from all bondages. Thus, for me, freedom is the only way of collaborating with this universal phenomenon of evolution.

No more peace and contentment. But a profound human revolution. A human revolution which consists in freeing oneself from every kind of personal, national, racial, and ideological pre-occupation. As the source of all evil is the very substance of our consciousness, we will have to deal with it.

Everything that has been transmitted to our mind through centuries will have to be completely discarded. We will have to deal with it in a total way. I have dealt with it. It has dropped away. I have discarded it.

This does not mean that we have the free will to act in whatever way we want. As Advaita sages point out, there is no doership. For, in Reality, as Wholeness, none of us is ever separate from the Divine or any other being for an instant. So, as we are all governed by the fundamental law of the Universe, we sink or swim together. So, while our Divine Essence is Immortal, we cannot avoid the eventual extinction of our species.

To put this ancient wisdom into practice, Vimala wrote Spirituality and Social Action: A Holistic Approach in her early sixties, seeking to bring her intuitive sense of Wholeness into society. Much inspired by Krishnamurti and Mohandas Gandhi, she began her vitally important, visionary book with these uplifting words, “In a time when the survival of the human race is in question, continuing with the status quo is to cooperate with insanity, to contribute to chaos.” As conservatism is extremely dangerous at these rapidly changing times, she therefore asks, “Do we have the vitality to go beyond narrow, one-sided views of human life and to open ourselves to totality, wholeness?” For, as she says, “The call of the hour is to move beyond the fragmentary, to awaken to total revolution.”

Two years later, when giving a series of five lectures in Chile titled Science and Spirituality, hosted by the social activist Cecilia Dockendorff, Vimala said that the science of spirituality begins with Wholeness or Totality, like Aurobindo’s notion of the undivided Supermind. As she said, referencing David Bohm’s endeavours to bring a sense of meaningful Wholeness to science, “It begins with the awareness of the whole—the wholeness or the totality, it proceeds from the awareness of wholeness to analyse the particular as organically related to the whole.” Similarly, Krishnamurti wrote in Education and the Significance of Life, “Can any specialist experience life as a whole? Only when he ceases to be a specialist.”

Sadly, however, Vimala’s visionary book is now out of print and I know of no physicists who understand how Bohm unified quantum and relativity theories in Wholeness. So, it seems that her call to awaken to Total Revolution is falling on deaf ears.