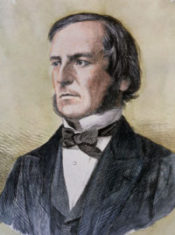 George Boole (1815 – 1864) is best known through the logic operators of AND, OR, and NOT, which some search facilities on the Internet include in order to refine queries of pages and databases. These operators are also used in the central processing units of computers as the basis of arithmetical operations.

But what is less well known is that Boole founded mathematical logic in 1854 following a mystical experience that he had had in 1833 as a seventeen-year-old.  As Desmond MacHale, his biographer, tells us, “Boole referred to the incident many times in later life and seems to have regarded himself as cast in an almost messianic role.”

At the time, Boole was a humble schoolteacher, setting up his own school in Lincoln at nineteen, in order to support his family, his father being a shoemaker, who was much more interested in science, literature, and mathematics to attend fully to his business.

Boole’s revelatory experience led him to free mathematics from the tyranny of number systems, regarding the essence of mathematics as “the study of form and structure rather than content, and that ‘pure mathematics’ is concerned with the laws of combination of ‘operators’ in their widest sense.” In 1844, he published his ideas on a general theory of operators in a paper for the Royal Society, which the fellows did not readily accept, for Boole was a precocious autodidact, working outside the constraining mainstream of mathematics at the University of Cambridge. However, he was eventually awarded the Royal Society’s first gold medal for mathematics, known as the Royal Medal.

By thus gaining a reputation as one of the leading mathematicians of his day, Boole applied for and was appointed the first professor of mathematics at Queen’s College in Cork in 1849, even though he did not have a degree. It was there that he published the book that laid down the foundations of mathematical logic, titled The Laws of Thought.

The first sentence tells us Boole’s intentions with this book: “The design of the following treatise is to investigate the fundamental laws of those operations of the mind by which reasoning is performed,” with the purpose of exploring “the nature and constitution of the human mind”. In other words, Boole regarded mathematical logic—as the science of mind and reason—as lying within psychology, where it logically belongs.

However, the principle that logic is a branch of psychology has never been fully accepted by mathematicians. For instance, Charles Sanders Peirce, in the first of a series of lectures in 1865 ‘On the Logic of Science’, said, “we ought to adopt a thoroughly unpsychological view of logic”, repeating this assertion in another lecture in 1898, when he said, “My proposition is that logic, in the strict sense of the term, has nothing to do with how you think.”

Then, most famously, Bertrand Russell and Gottlob Frege agreed in 1902 in an exchange of letters that any psychological element must be rejected from logic, which, in their view, is only concerned with symbols. The reason for this opinion is obvious. While the human mind is constantly wrestling with the paradoxical world we live in, Russell had found paradoxes in the foundations of mathematics, which could invalidate deductive reasoning and mathematical proof if they were found in the axioms.

Boole’s wife Mary Everest (1832 – 1916), the niece of the Surveyor-General of India, who gave his name to the world’s highest mountain, seems to be the only person who really understood the real intention of Boole’s work, as she showed in a remarkable letter published in 1901 in Ceylon titled ‘Indian Thought and Western Science in the Nineteenth Century’. She wrote, “nearly all the logicians and mathematicians ignored the statement that the book was meant to throw light on the nature of the human mind; and treated [Boole’s equation] entirely as a wonderful new method of reducing to logical order masses of evidence about external fact.”

As Mary was the daughter of a rather unconventional Christian priest, she could see and feel the mystical strand underlying the religions, being especially critical of “the great English religious mind, which considers itself competent to preach the Truth, the only saving Truth, to all mankind; the great academic educational mind which is to improve Hindu culture off the face of the earth, fell into a trap which I believe would hardly have deceived a savage.”

What a wonderful couple the Booles were, having five remarkable daughters, one of whom, Alicia Stott, discovered by synthetic means that there are six regular four-dimensional polytopes, corresponding to the five Platonic solids in three dimensions. Alicia created three-dimensional cardboard models of their cross-sections, much to the amazement of professional analytical geometers, such as H. S. M. Coxeter, who said, “Only one or two people have ever attained the ability to visualize hyper-solids as simply and naturally as we ordinary mortals visualize solids.”