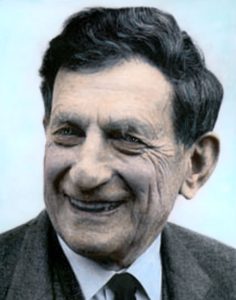 I first met David Bohm (1917 – 1992), my principal scientific mentor, in November 1980 at Birkbeck College in London. It was a most unlikely meeting for he had been a friend and colleague of Albert Einstein and I had resigned from my marketing job with IBM six months earlier, having abandoned physics at eighteen because I didn’t believe in the existence of a fundamental particle of matter or the big bang.

We met because I had sent him my first tentative attempt to explain why scientists and technologists are driving the pace of change in society at exponential rates of acceleration titled ‘The Future of Computers and Society’. I did so because that summer I had serendipitously discovered Bohm’s book Wholeness and the Implicate Order from a short review in a Sunday newspaper by Danah Zohar.

Even though I understood little of this book the first time I read it, I discovered that we were both working on the same problem: how to heal the fragmented mind in Wholeness. For as he said in the first paragraph, “Fragmentation is now very widespread, not only throughout society, but also in each individual; and this is leading to a kind of general confusion of the mind, which creates an endless series of problems and interferes with our clarity of perception so seriously as to prevent us from being able to solve most of them.”

In my case, I had spent the previous winter attempting to develop a comprehensive model of all processes in a business, including the process of developing the model, while developing an IBM marketing programme for interactive computing. I was doing so because I wanted to discover if it would ever be possible for a computer to do my job as an information systems architect in business. 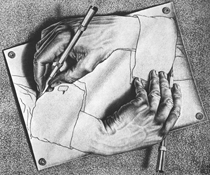 Developing such a model is a little tricky for it is like a television camera filming itself filming, graphically represented in M. C. Escher’s lithograph ‘Drawing Hands’. In the first chapter of this book, Bohm said that the key to solving this problem is to regard the content and process of thought as two aspects of one undivided movement, which he called the holomovement, underlying physical reality. This insight lies at the core of my meditation practice, enabling me to use Self-reflective Intelligence to heal the splits between all opposites, including those between quantum and relativity theories, mathematics and mysticism, and science and spirituality.

Having abandoned physics at school, at our first meeting the most important question I asked Bohm was “What is the source of all the energy in the Universe?” He replied, “Energy does not have a source; it is contained within structure.” I now know that the first part of this answer is not true. But by viewing the Cosmos as a meaningful information system, the second part has enabled me to develop a cosmology of cosmologies that unifies the psychospiritual energies within us with the four physical forces recognized by physicists.

Bohm’s writings contain many more ideas that I have incorporated into Integral Relational Logic and the Unified Relationships Theory, as I describe in my own writings. However, as even his fellow physicists have not yet grasped his revolutionary insights, communicating the principle that mystical psychology is the primary science rather than physics is not easy.

Of course, as the Theory of Everything contains a self-inclusive model of the psychodynamics of society in the context of evolution as a whole, I understand the reasons why people have great difficulty in understanding and accepting what I am saying. So I have come to terms with being an outsider to society, able to conquer the depression that might otherwise arise, as it did for Bohm.

It is this deep inner strength that gives me the confidence to continue to pursue my life’s purpose to complete the final revolution in science, acknowledging the immense contribution that Bohm made to the history of ideas.