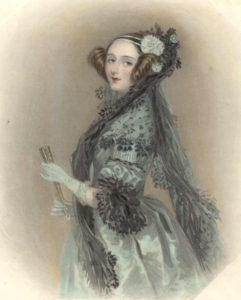 Ada Lovelace (1815 – 1852), can hardly be considered an outsider as the daughter of George, Lord Byron the poet and his wife Annabella, also a baroness in her own right, first cousin of Lord Melbourne, the British prime minister and confidante and mentor of Queen Victoria when she ascended the throne aged eighteen. She is known as Lady Lovelace because when she was twenty, she married William, Baron King, promoted to Earl of Lovelace three years later, through her relationship to the prime minister.

Nevertheless, I include Ada in my list of kindred spirits because I’ve been in love with her for many years, a rebellious spirit, often at odds with the society she lived in, especially in childhood and adolescence. Her parents separated when she was one, essentially because her mother thought that her father, famous as a celebrated romantic poet, was mad. So rather straitlaced and prim Annabella was determined that Ada would learn nothing of poetry, which she associated with the dissoluteness of her husband.

Ada, a brilliant mathematician, understood the potential capabilities of computer technology vis-à-vis human intelligence far better than Alan Turing and many computer scientists in the world today, such as Ray Kurzweil and Vernor Vinge, who are saying that humanity is on the verge of a technological singularity in time, when machines with so-called artificial intelligence will take over the workplace. What such computer scientists are ignoring is a statement that Ada made in 1843. In a brilliant memoir on Charles Babbage’s Analytical Engine, the first design for a general-purpose computer, she wrote:

The Analytical Engine has no pretensions to originate anything. It can do whatever we know how to order it to perform. It can follow analysis; but it has no power of anticipating any analytical relations or truths. Its province is to assist us in making available what we are already acquainted with.

Babbage called the two main components in his Analytical Engine Mill and Store, terms he borrowed from the textile industry, corresponding to the central processing unit (CPU) and random-access memory (RAM) in modern computer systems. He envisaged that the instructions needed to operate the machine would be entered on punched cards, like those that Joseph-Marie Jacquard had invented to automatically control the patterns of weaving of cloth in a loom. Indeed, in her memoir on the analytical engine, Ada delightfully wrote, “We may say, most aptly, that the Analytical Engine weaves algebraic patterns just as the Jacquard-loom weaves flowers and leaves.”

Ada, as ‘The Bride of Science’, has sometimes been called the world’s first programmer, after publishing a program to calculate Bernoulli numbers at the end of her memoir to Luigi Menabrea’s ‘Sketch of the Analytical Engine’ in 1843. However, this was not the first program ever published. When Babbage gave a presentation of the Analytical Engine in Italy in 1840, he presented a procedure for solving a pair of simultaneous linear equations, which Menabrea, later to become prime minister of Italy, then published in French two years later.

So, it is clear that Ada received much help from Babbage, saying in a letter to him, “I am in much dismay at having got into so amazing a quagmire & botheration with these Numbers.” Given the mysteries of the Bernoulli numbers, the challenges of understanding the relationship between humans and machines, and her contradictory early life, it is not surprising that Ada suffered from what is today called bipolar disorder, like some others pushing the frontiers of evolutionary development towards their glorious culmination.