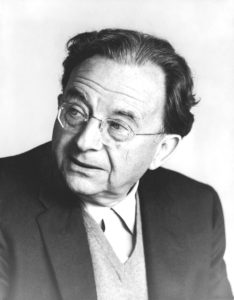 Erich Fromm (1900 – 1980), was one of the four major influences on the development of my ideas in the early 1980s, as I set out to use my skills as an information systems architect to design a life-enhancing global economy that would give everyone on the planet the opportunity to realize their fullest potential as human beings before our inevitable demise. The others at that time were David Bohm, Pierre Teilhard de Chardin, and Arthur Koestler.

By looking at business through the eyes of information systems architects, rather than through the financial models of economists, accountants, and bankers, such a Sharing Economy is theoretically possible. It would need to be developed in harmony with the fundamental law of the Universe, which Heraclitus called the Hidden Harmony. But without a massive awakening of Love, Intelligence, and Consciousness this natural way of managing our business affairs looks quite impractical.

One of Fromm’s most important books was The Sane Society from 1956, as a successor to the wartime The Fear of Freedom, Escape from Freedom in the USA. The titles of the first two chapters are ‘Are we sane?’ and ‘Could a society be sick?’ Fromm answered them with a resounding ‘NO’ and ‘YES’, respectively.

But what is this sickness that most are suffering from? Well, we first need to note that this is not a physical illness, but a mental disorder. As Fromm wrote in 1947, we humans are the least instinctive of all the animals. Using the metaphor of a computer, very few of our thoughts and actions are hard-wired. The innate instincts and automatic reflexes of babies to suck, grasp, cry, and respond to stimuli mostly disappear within the first few months of life.

Our learning—corresponding to software and data in computers—mostly determines the way that we view the world and ourselves, and hence our behaviour. Our minds, stimulated by the Divine Power of Life, determine how we think and act, far more than our brains.

However, I did not discover the essential nature of this sickness until 1992, when I bought two books in an esoteric bookshop in central Stockholm. In Mysticism, F. C. Happold tells us, “To Jew, Christian, and Moslem, a gulf is felt to exist between God and man, Creator and created, which can never be crossed. To assert that ‘Thou’ art ‘That’ [as esoteric Hindus do] sounds blasphemous”. And in Adam, Eve, and the Serpent Elaine Pagels points out, “Even the mystics of Jewish and Christian tradition who seek to find their identity in God often are careful to acknowledge the abyss that separates them from their divine Source”.

These observations changed my life, as I had found the root cause of conflict and suffering that I had been searching for since I was seven years of age. Humans have been fighting each other for millennia, suffering grievously as a consequence, because people have become experientially and cognitively separate from Divine Reality.

This is rather strange because no one can return Home to Wholeness—as the union of Wholeness and Oneness—for nobody has ever left Home. By transcending the categories, we can realize the Genuine Identity that we share with all other beings. Who we think we are is nothing in the illusory world of form. In Reality, we are not our bodies, minds, or souls.

So what name can we give this deep wound in the collective and cultural psyche? Well, is there any other word than schizophrenia ‘split mind’, from a Proto-Indo-European base meaning ‘to cut’, also the root of science, through Latin scīre ‘to know’, in the sense that to know means ‘to separate one thing from another, to discern’.

So science in particular, and human learning in general, is more focused on analysis, separating things into parts, than synthesis, bringing them all together in Wholeness. This divisive approach to learning arises from a psychological sense of separation, a constricted sense of identity, which Fromm called alienation, from French aliéné ’mentally ill’.

But how can we heal our split minds? Well, in 1975 in his greatest masterpiece To Have or To Be? Fromm turned to the mystics, particularly Meister Eckhart and Shakyamuni Buddha, having focused on the works of Sigmund Freud and Karl Marx during the early years of his psychosocial studies.

Specifically, he said that if we are to avoid psychological and economic catastrophe, we can do no better than be guided by the Buddha’s Four Noble Truths, which Fromm likened to the four-step medical practice:

This is something that many millions are seeking and practising today.

But Fromm went even further. Because of our fragmented, specialist minds, humanity is also suffering from delusion with a false conception of the Universe, as the Totality of Existence. So he said that we also need a psychospiritual science of humanity if we are to bring about much-needed social reconstruction. However, Fromm was uncertain of success, saying,

Whether such a change from the supremacy of natural science to a new social science will take place, nobody can tell. If it does, we might still have a chance for survival, but whether it will depends on one factor: how many brilliant, learned, disciplined, and caring men and women are attracted by the new challenge to the human mind.

Fromm went on to say that he saw only a two per cent chance of such a radical transformation in consciousness coming about, a goal that no business executive or politician would regard as worthwhile pursuing. Nevertheless, he went on to say, “If a sick person has even the barest chance of survival, no responsible physician will say, ‘Let’s give up the effort,’ or will use only palliatives. On the contrary, everything conceivable is done to save the sick person’s life. Certainly, a sick society cannot expect anything less.”

Integral Relational Logic, as the commonsensical art and science of mind and consciousness, is the humanistic science that Fromm called for, still not understood and accepted. Maybe it is now too late with an overheated global economy, accelerating global warming, and the threat of nuclear annihilation hanging over us all. Nevertheless, I continue to live in the moment, pursuing my life’s purpose to complete the final revolution in science. For how else am I to enjoy living in the Age of Light at these end times we live in?