I look at the Universe through the eyes of its fundamental law, which states Wholeness is the union of all opposites. One consequence of this law, which is called the Principle of Unity, is that all beings in the relativistic world of form emerge from the Formless Absolute and return there at the end of their lifespans.

So, while the Absolute is Immortal, no forms or structures are. As Shakyamuni Buddha said on his death bed, “Behold, O monks, this is my last advice to you. All component things in the world are perishable. They are not lasting. Strive on with diligence.”

This fundamental life-and-death principle applies as much to Homo sapiens as our own bodies. Our species is not immortal. One day a generation of children will be born who will not grow old enough to have children of their own.

With the Annual Review of Earth and Planetary Sciences and the Polar Science Centre projecting that the Arctic will be ice-free in the summer of 2018 or 2019, as this chart of the exponential trend indicates, it looks as if that generation has already been born. 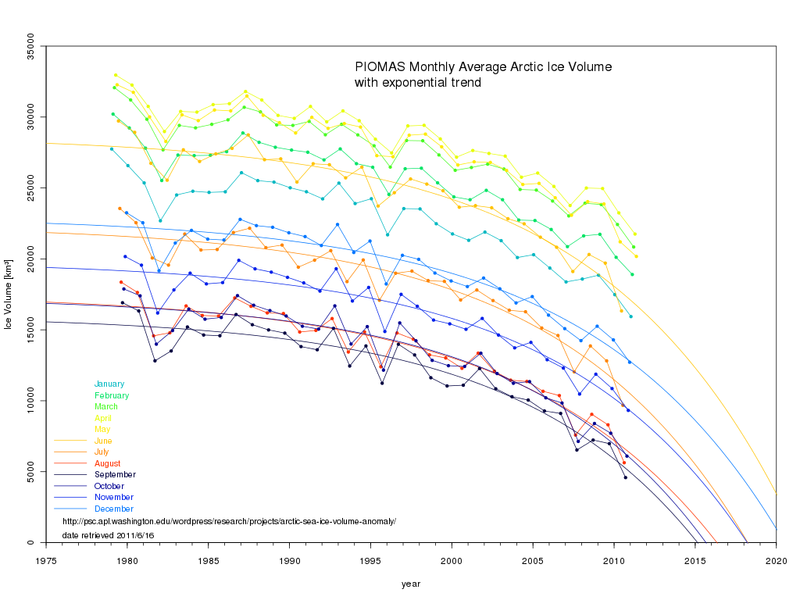 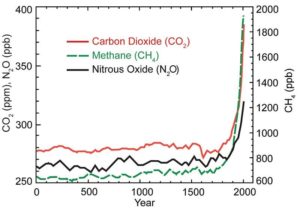 To see what effects these projections could have on climate change in the immediate future, this chart shows the way that the concentration of three principal greenhouse gases have increased since the beginning of the industrial revolution, around 1750. Now there are between 500 and 5,000 gigatons of methane frozen in the East Siberian Arctic Shelf, north of Russia, compared to just 5 gigatons currently in the atmosphere. And methane is 150 times more potent a greenhouse gas than carbon dioxide during its first ten years in the atmosphere.

So if just one per cent of the minimum estimate of methane trapped in the Arctic were released into the atmosphere, this would double its parts per billion, having the effect of an increase of 300 parts per million of carbon dioxide, an increase of 75%, far beyond the 410 ppm in April 2018. As planet Earth warms, methane is likely to be released into the atmosphere at ever-increasing exponential rates through a positive feedback loop.

One consequence of this is that governmental attempts to keep the average temperature on Earth below two degrees above pre-industrial levels and predictions that temperatures could actually rise by four or five degrees by 2100, making the Earth uninhabitable by then, are way off the mark, as Guy McPherson and many others have been saying during the past few years.

For studies done by Sam Carana suggest that temperatures could rise even faster in the next few years because of huge eruptions of methane from the seafloor of the Arctic Ocean and many other factors. So there is a high probability that Homo sapiens could be extinct by the middle of the 2020s, with our ability to grow corn for baking our daily bread being lost by 2020.

It is vitally important not to blame humans for this critical situation. Even if our lives are awarely (consciously and intelligently) guided by the Principle of Unity, enabling us to live in love, peace, and harmony with each other and our environment, we are all the products of some 13.8 billion years of evolution and don’t have the power or free wlll to defy the fundamental law of the Universe, through changes in lifestyle, geoengineering, or whatever.

For myself, my psychospiritual practice has been inwardly preparing me for this inevitability since 1982, while seeking to complete the final revolution in science by explaining what is causing scientists and technologists to drive the pace of evolutionary change at unprecedented rates of exponential acceleration.

Although my initial vision of human extinction in two or three centuries has become just a few years, I continue to pursue my life’s purpose to consummate the sacred marriage of science and spirituality, unifying mysticism and mathematics. We could thereby establish Consciousness as Ultimate Reality, showing that we are all interconnected, that none of us is ever separate from any other being, including the Supreme Being.

For I cannot defy my guiding spirit, which the Greeks and Romans called Daimon and Genius, respectively. In my experience the best way to face death is to come fully alive as a superhuman being, free of the mechanistic constraints on our learning imposed on us by our cultural and personal conditioning. For as the scientific mystic Pierre Teilhard de Chardin said in The Human Phenomenon:

The way out for the world, the gates of the future, the entry into the superhuman, will not open ahead to some privileged few, or to a single people, elect among all peoples. They will yield only to the thrust of all together in the direction where all can rejoin and complete one another in a spiritual renewal of the Earth.