Nowadays, when I wake up in the morning, I usually spend a few minutes resting in Stillness, knowing that all opposites are unified in Nondual Wholeness. In a way, there is nothing to get up for at these end times we live in. I feel that my life’s journey is complete. I have been successful beyond my wildest dreams, finding the Truth that I began searching for as a seven-year-old.

What this inner experience tells me is that it is not unique to me. No one can return Home to Wholeness for nobody has ever left Home. The Cosmic Context and Gnostic Foundation for all our lives is Consciousness, which provides the inner light that enables our innate Self-reflective Intelligence to see both sides of any situation, where Love, Peace, Stillness, and Presence reside.

This I know with absolute confidence, with no doubt whatsoever. For it is inner knowing of the Absolute, quite different from symbolic knowledge, expressible in words and other signs. So please don’t be confused by the words I use to describe my innermost experience, when the experiencer, as a separate being, disappears.

In such instances, when we seek to communicate the experience of our True Nature, words are like a finger pointing to the Moon, as Shakyamuni Buddha taught. There is nothing to have a debate about, for you too know the Truth deep in your heart.

What directly experiencing the Presence of the Divine also tells me is that my life’s journey in the world of form and, indeed, the whole of evolution since the most recent big bang, is nothing but an illusion, an appearance in or abstraction from the Ocean of Consciousness, like waves and currents on and beneath the surface, never separate from Ocean.

This all-embracing holographic worldview is a multidimensional generalization of David Bohm’s one-dimensional holomovement in the Implicate Order, with which he unified the incompatibilities between quantum and relativity theories.

But I did not know this as an adolescent in the 1950s, struggling to make sense of what I was being taught in science and religion. Although I have always been Wholeness, somewhere along the line I went through a radical transformation of consciousness, recognizing that there is a primary-secondary relationship between the vertical and horizontal dimensions of time.

Only the Eternal Now is Reality, a conception that is absolutely vital for me to come to terms with the imminent extinction of our species in the Age of Light following the deaths of all the war-mongering civilizations of the patriarchal epoch, as the Community page illustrates.

So how has this radical transformation of consciousness come about? Well, this is a very long story, with many crises and turning points, going right back to my conception at the end of August 1941.

However, it is perhaps simplest to begin in 1974, when I was a systems engineering manager leading a team responsible for ensuring that an IBM timesharing computer that the British Post Office, now British Telecom, had bought passed its acceptance trials.

Such computer systems marked a major turning point in the evolution of the data-processing industry, as managers, engineers, accountants, and other professionals were learning to interact directly with computers, doing their own personal computing, some developing decision support systems by accessing enterprise databases.

The tools available at the time were pretty primitive compared with such systems as the Jupyter Notebook, which I used in the winter of 2016 to show how the discrete logistic map in nonlinear mathematics can be used to model the accelerating, exponential pace of all evolutionary processes from the most recent big bang to its Accumulation Point in chaos-theory terms.

I was led to begin my evolutionary studies through introspection as a result of a major midlife crisis in 1977, when I was not promoted to a branch systems engineering manager as planned for reasons that were outside my career manager’s control. To rebuild my career after this breakdown, I began to ponder the long-term psychological and economic implications of society’s growing dependency on information technology.

Most significantly, what is going on deep within humans and computers when they communicate with each other? While studying this problem during the winter of 1980, at 11:30 on 27th April 1980, I suddenly had the idea that the two types of data in computers and humans—active and passive—are types of energy, like kinetic and potential energy in mechanics.

I knew at once that I had been given the key that would open all the innermost secrets of the Universe that I had wondered about since I was a young boy. So three weeks later, in a state of great excitement I resigned from IBM and set out to develop a cosmology of cosmologies that would unify the nonphysical and physical energies at work in the Cosmos.

But this was not just about ideas. I also needed a way of describing my innermost experiences to my colleagues, friends, and relatives, some of whom thought I had gone a little mad. In a sense, they were right. For what was happening to me was quite out of the ordinary, with no language that I knew of from the past to explain this apocalyptic awakening. 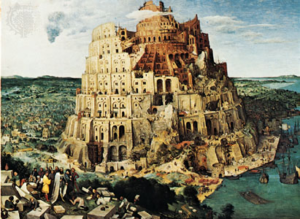 At the time, I told my friends that it felt that a dam had burst in my psyche, releasing an abundance of energy that had been held back during the first half of my life by my cultural and personal conditioning. In Hindu terms, Shiva the Destroyer first acted to demolish the Tower of Babel that represents the confused world of learning, so that Brahma the Creator could create a completely new Universe within me.

In Western terms, the best words to use for this creative process are Life, bubbling up from the Divine Origin of the Universe, like a fountain, and Logos, which Heraclitus regarded as the “immanent conception of divine intelligence” signifying “the rational principle governing the cosmos”, as Richard Tarnas put it in The Passion of the Western Mind.

So, as the words I needed to denote the root cause of my creativity already exist in languages in the East and the West, albeit outside science as it is understood today, it was clear that my experiences are not unique. However, what was being created by the irrepressible power of Life was not only unique, it was unprecedented in the entire history of human learning.

While my Great Awakening began in my late thirties, it was not until I was in my early seventies that I really understood what had happened to me during all these years. But by this time, I had left the divisions between science and spirituality and East and West far behind, needing to borrow words from both mysticism and mathematics, as the science of patterns and relationships, to describe my experiences.

However, none of my writings really convey what I want to say. For David Bohm pointed out that a theory does not consist of words and other symbols printed on paper or stored electronically. Rather, a theory is a form of insight, from Greek theōria ‘contemplation, spectacle’, literally ‘seeing a view’. 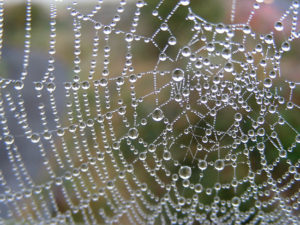 The picture that I see with my inner eye is very simple, spiritually depicted in Indra’s Net of Jewels, in which each jewel both emits and reflects light from all the other jewels in the net, which Alan Watts likened to dewdrops on a spider’s web, sparkling in the morning sun, a representation of the Buddhist conception of the Universe.

Mathematically, this self-reflective map of the Cosmos can be depicted as a graph, consisting simply of arcs between nodes, a generalizing principle that evolved from Leonhard Euler’s solution to a problem relating to the seven bridges of Königsberg, now Kaliningrad, in 1736. This mental image is the basis of my meditation practice.

To illustrate, this graphic is a structure, which consists of forms and meaningful relationships between them. Each node is a structure consisting of a deeper level of relationships between forms. Following the practice of neti, neti in jñāna yoga, the path of wisdom and abstract knowledge in Advaita, corresponding to via negativa in Christianity, these nodes become singularities so that only relationships remain. Then even these disappear in Emptiness or the Void, Shūnyatā in Buddhist terms, the Gnostic Foundation for all our lives.

Conversely, each structure is a node in an ever-expanding universe, which eventually dissolves in Fullness or the Plenum, not unlike Buddhist Tathatā ‘Suchness’, a seamless, formless continuum, with no divisions anywhere, like the Tantric worldview, weaving warp and woof in a loom, providing the Cosmic Context for all our lives.

Each of us is thus both an individual jewel in Indra’s net and the entire net. We are all as significant as each other, equally insignificant in the overall scheme of things, subject to exactly the same laws of the Universe as all other beings.

This meditation practice is thus the Ultimate Tantric Yoga, meaning ‘union of opposites’, taking place in the Eternal Now. Nothing else really matters. Yet there is nothing special about this experience. It lies beyond all attributes, such as bliss, joy, happiness, ecstasy, and rapture and their opposites. It just is.

From this Divine, Cosmic perspective, I can see that the underlying structure of the Universe is an infinitely dimensional network of hierarchical relationships, possessing the property of self-similarity, like geometric fractals. By applying Divine Self-reflective Intelligence, lit by the Coherent Light of Consciousness, we are thus able to view the Cosmos holographically, in which every being contains the Whole.

Immanent and Transcendental opposites are unified in Nonduality or Wholeness, which is actually beyond concepts and the words that represent them, existing before even the Cosmic Context and Gnostic Foundation are conceived. The ancients called this the Æther, the fifth element or quintessence in Greco-Roman cosmology, called Akasha in the East, Ervin Laszlo’s term for the Universal Quantum Field.

As the body-mind-soul organism writing these words is both a node in this Cosmic map and the entire Immortal Cosmos, this meditation practice greatly helps me face the imminent death of our species with equanimity. Realizing that there is no death in Reality is the only way that I can come fully alive in these end times we live in.